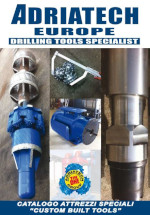 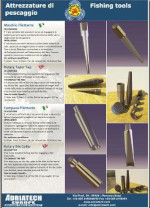 Impregnated bits present a metallic layer, impregnated of diamonds on its cutting face.

Fine diamonds are mixed with a metallic powder, called matrix, which is then subject to thermal treatment assuring the metallurgic bond of the matrix on the metal part of the bit.

Because of the close mix of the diamonds with the metallic matrix, the quality of impregnation has to be carefully studied. To achieve an efficient cutting action, the diamond crystals have to be slightly exposed above the matrix level to penetrate the rock under the pressure action.

As the diamond crystals wear, blunt and flat surfaces appear which reduce
the rate of penetration into the rock. To maintain optimum performances during the entire bit life, it’s important that the matrix wear is synchronised with the diamond wear to ensure exposure of new diamonds
with sharp edges.

Although not as versatile as impregnated bits, the surface set bit has specific applications in soft to medium hard formation. The surface set bit, as its name implies, is manufactured with diamonds individually set on the matrix. The mold is then subject to a thermal treatment assuring the metallurgic bond of the matrix on the metal part of the bit.

We have selected a diamond of higher quality for surface set bits, called PREMIUM. This diamond, of WEST-AFRICA origin, carefully selected, is mechanically rounded creating an ovaloid stone that offers the best resistance to shock loading. The mechanical rounding process has the added advantage of eliminating diamonds weakened by fissures and
cleavages. This WEST-AFRICA PREMIUM diamond is then chemically treated to reduce friction between the diamond and rock being cut.

Placed behind the bit, the reaming shell fulfils a dual role. It stabilizes the bit and the core barrel to reduce the vibration that could damage the core and create premature wear of the core bit and the core barrel. It reams the hole when, accidentally, the core bit is worn and undergauge, thus allowing the replacement of the used bit with a new one without having to carry out long and costly reaming operations. The helicoidal pads of the reaming shell ensure a 360° hole wall coverage. The reinforcement of the pads is fulfilled with tungsten carbide inserts on the cutting gage and natural diamonds, both set in an extra-hard matrix of fused tungsten carbide. Such a combination gives the reaming shells an incomparable life, and at competitive prices.

Other trademarks shown on this website belong to their owners. All other materials and descriptions are Adriatech Copyright© 2022.Reproduction or commercial use by other companies, even only partial, is expressly prohibited.